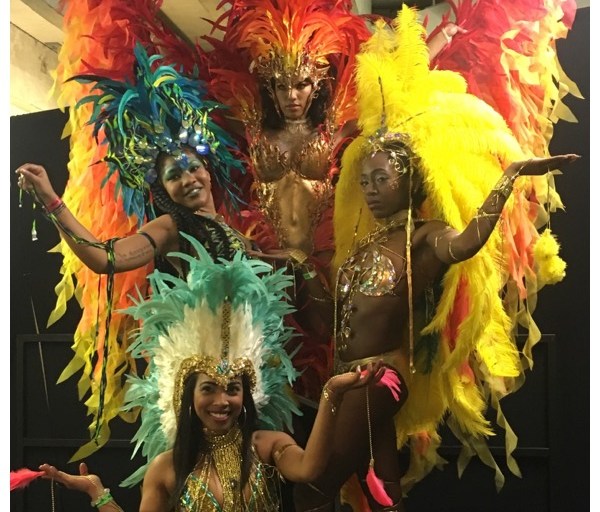 I am kind of excited about Carnival Expo for many reasons but this is one of my favourites! We have more than ten carnival mas bands under one roof!  More than ten!!!  This is so rare.  Actually, apart from at Notting Hill Carnival, independent mas bands never ever showcase their costumes in the same venue (unless they are being hosted by a bigger band such as in the case of Poison in the past and Chocolate Nation now).  Some will be showing their costumes for the first time, others you get to view again, and others won’t be launching right now but they are here to support Carnival Expo and to let it be known that their band launch is coming up soon. For me, here is the best bit.  You get to compare live costumes from different bands immediately.  A second chance to have a look at costumes and see new costumes for the first time. There is a catwalk show towards the end of the first day of Carnival expo. Some bands will be participating, other’s won’t but they are around at the event.

Before I go any further, let me state very clearly that I am part of the team involved in Carnival Expo.  However, I do not believe that this negates my writing of this two day cultural event.  In fact I’d say it gives me the best opportunity to share some unique insights into the rationale and aim for Carnival Expo. 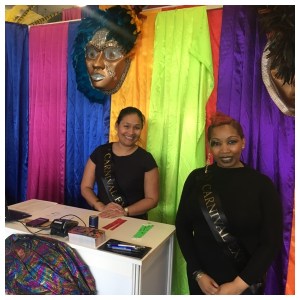 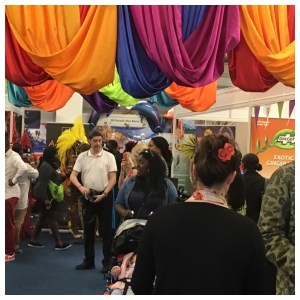 Carnival Expo is in its second year.  The vision of the director and creator Andrew Rajpaulsingh was to bring a sense of the carnival culture to the London capital in an indoor arena. But not just the salient music and costumes of carnival.  No, it is also about the food and drink of carnival, the dance of carnival, seminars on the history of carnival, the various businesses associated with or who are on the periphery of carnival. But here?  In this article? I am just going to focus on the Carnival Mas Bands and the catwalk showing of mas band costumes.

At Carnival Expo over the course of two days we have;  Arawak, Baccahanalia, Burrokeets, Carnival Fever, Caribbean Sessions, Funatiks, Iconic Mas, Karnival Mania, Mardi Gras, Pure Lime,  Melissa Hartman Designs, Reef Mas,  Release D Riddim, Maria Joseph’s designs, Wassiville, Wotless and  Xtreme Mas Band.  Some bands go on the road on Carnival Sunday, some Carnival Monday.  There are T-shirt bands and costume bands.   It’s not easy getting all these bands together in one place. But here it is. Various mas bands all showing their designs and hard work to one massive fluid audience.  Some of that audience will be their own masqueraders. However, most of the crowd may not have even heard of the individual mas bands or been to their individual launches. There are models in costumes walking around the event. And there is the catwalk showing of costumes which is later on Saturday afternoon. 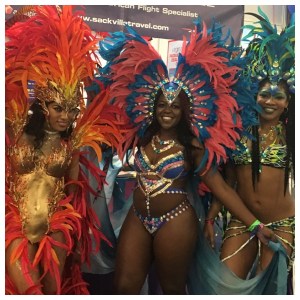 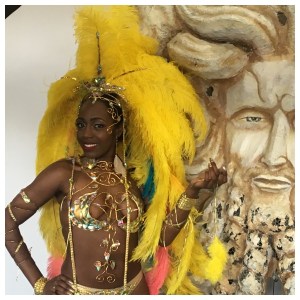 Planning and showing the costumes for the show was one of the greatest challenges of Expo.  Mas band leaders and event planners will know the minutiae of getting the costumes of ONE band on stage.  Imagine organising NINE different mas bands. All who have different sized costumes, all who have different number of sections, all who may want different songs played with their costumes. Some information about the bands’ requirements was collected before Carnival Expo. But there was a lot more to be confirmed, there were additions of mas bands, changes, music to be played. That meant going to each band at Expo at their various stalls to find out what was needed.  There is reminding the bands the time of the show will take place. Announcements were made half and hour, 10 minutes before the event at various areas around the event. There is waiting for one event to be completed before the costumes can head on backstage to get organised.  I let William from SOS entertainment, DJ Triple M and Darryl  know the music and they take care of the music for the stage show.  They do an amazing job. Back stage, the bands have to be informed gain of the running order. We let the models know where to walk off the stage.  Martin Jay and Chantal Miller from Chantimedia are hosting the fashion show. They are consummate professionals and are given information about the bands before and during the catwalk show. It was time.

The bands which took part in the showcasing of costumes are as follows; Funatiks (and Envy Designs), Burrokeets, Caribbean sessions, D Riddim Tribe, Mardi Gras Arts, Bacchanalia, Melissa Simon-Hartman Designs, Wassiville, Shari Designs, Arawak who were launching at the event.  There are about 20 models back stage, all waiting with nervous excited energy. They go on when directed.  Being backstage, I am unable to give an account or even show you pictures of the showcasing. However, I was told by many of the crowd that it was good! What they loved was the opportunity to see so many carnival bands in costumes at one time, in one place, before carnival so they can see the costumes. It appeared to run smoothly with no major time gaps. Members of the crowd had different favourites depending on what they were looking for in a costume. 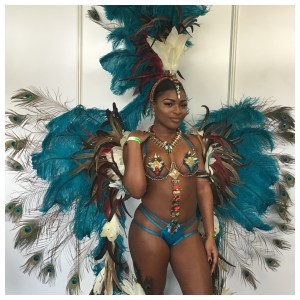 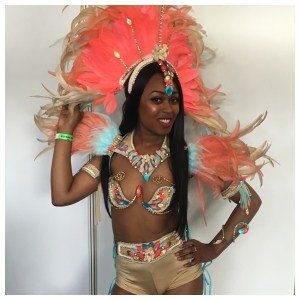 Caribbean Sessions,  a multi-branded company will be Notting Hill Carnival for the first time this year in costume. 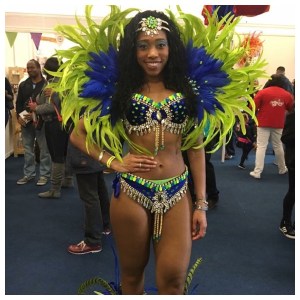 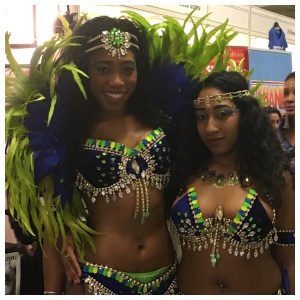 Arawak launched their costumes at Carnival Expo under the theme ‘License to thrill’. There are the options of ‘Diamonds are Forever, Goldfinger, Dr No and From Russia with Love’. 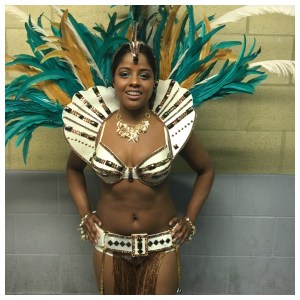 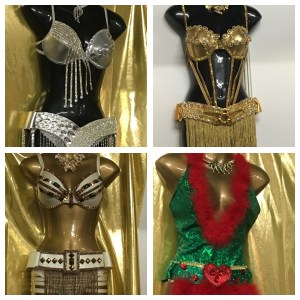 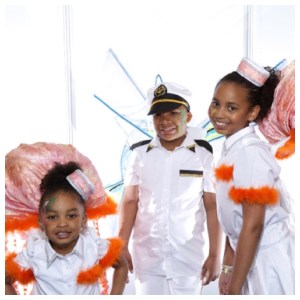 Bacchanalia show cased their new costume Valkyrie as well as other costumes from their ‘Supernaturals’ collection. 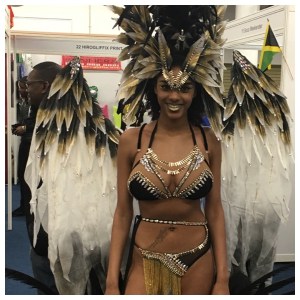 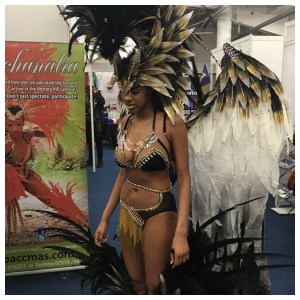 Melissa Simon-Hartman showcased one of her new designs for Elimu Mas band under the theme ‘The Lost Daughters’. 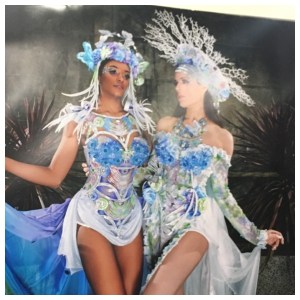 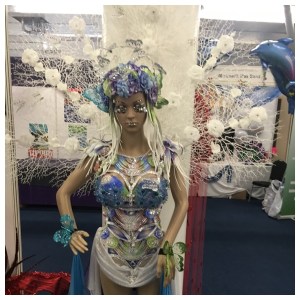 Xtreme Mas Band had one of their costumes modelled as they will be launching this saturday. 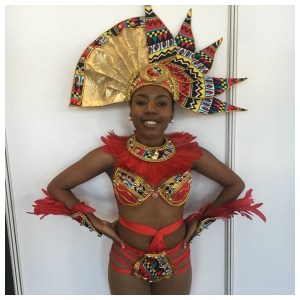 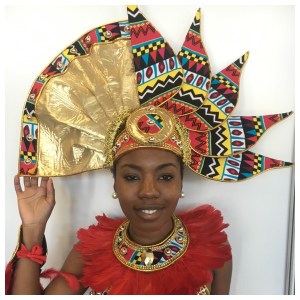 There were the designs from Maria Joseph. 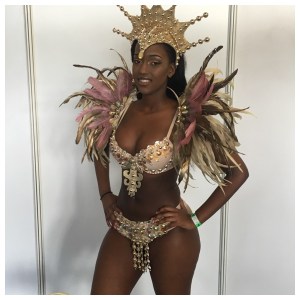 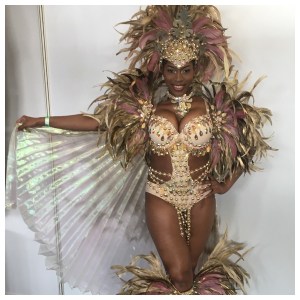 This Carnival Mas band extravaganza was a significant and pivotal event.   Not just for the exhibition itself but for Notting Hill Carnival. It highlighted a good number of mas bands and the variety of creativity and design. The London soca community has incredible talent!! It was great to see so many costumes and so many people from different bands in one place. At the impromptu five minute fetes at the Pure Lime stall, at Bakahnal Radio stall and in front of the main stage, there were the models in costume dancing up a storm with attendees.

For a look at various carnival mas bands, to be able to talk to the designers/band leaders and to meet some of the bands’ masqueraders, to be able to see various costumes all in one indoor location, Carnival Expo should NOT be missed next year!

For more information please visit  www.carnivalexpo.com and FB page Carnival Expo. Please visit FB page Ilovecarnivall for more pics and video footage.  Apologies to Funatiks Mas Band.  I did not have any pics of your models in costumes for the Saturday! 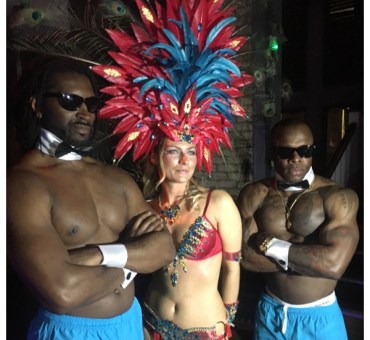 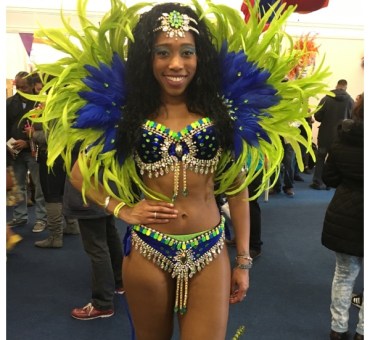