Day Two starts with glorious weather! Andrew wakes up at camp with a headache.  We asked him to rate it between 1 and 10 and this number varied.  He felt well enough to carry on and was determined not to have this spoil his experience.

The climate changes. From the lush green of the great forest to heather and moorland. And we walk for about seven hours.  We go straight up for about an hour and a half then head down then head up again. Part of the climatisation process.

The climb is becoming a bit more technical. There are more rocks and boulders to climb over. More use of hands to get the right footholds.  Have to be a bit more careful with your footsteps.  I follow Dickson’s step like his own Rasta shadow. There is still an air of cheerfulness and optimism within the climbers.  The weather is still good.  The climb is not terribly taxing as yet, more challenging but nothing too strenuous. I did see some porters taking a break  from their fast climb to the next camp.  And one or two did shall we say…. partake in the high grade during their break.  The scenery was absolutely breathtaking! 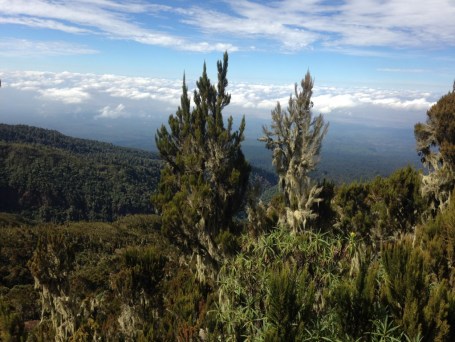 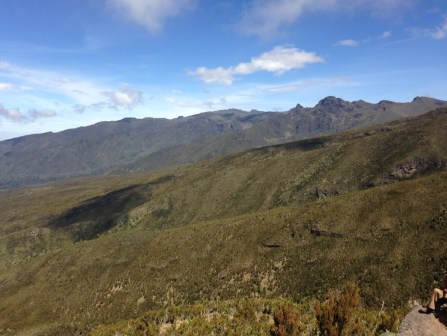 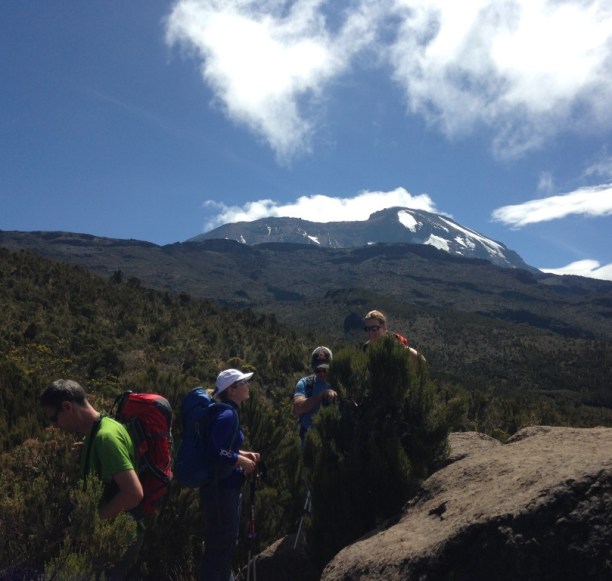 Andrew’s headaches persist as we climb. Not a 7 or 8 but from what he says they come and go. Kelly has some headaches and feels a bit nauseous  but nothing as serious as Andrew.  Climbing continues. Pole pole, slowly, slowly.  ‘Haraka, haraka, haina baraka’ , hurry has no blessings.

It is a lot of walking. When you ask how long, we are not talking about 20 minutes or half an hour’s walk. It’s not like walking for five or ten minutes to the local shop and then complaining that it is too long a walk or having to walk  a couple of bus stops because of tube strikes. We are talking walking for  houuuuuuuurrrrssssss.  For most of the time, there are long gaps of silence, you are with your own thoughts and your mind wanders off to wherever.  You observe your surroundings, cause really how likely is it that you will ever be here again?

When I was not tired of my internal musings, I learnt more about the porters, life in Tanzania and the process of becoming a guide from Dickson as we walked.  You first start as a porter.  If after that, you’re still keen on the idea of becoming a guide, you need to go to school to learn the theory. Learning a language; English, French is always a very good idea as most of the climbers will speak one of at least five languages. But additional schooling costs.

Dickson told me about his family; his wife Noela and two kids. Flora and Florian.   Noela is a seamstress.  Flora and Florian are still young and are unsure of what they would like to do when they grow up.  He described his future goals when he is no longer able to climb.  He told me of the history of Tanzania and a little about the upcoming elections and what his hopes are for his country.  The Tanzanians seemed quite passionate about this particular upcoming election as they were hoping it would bring about change for their country. Dickson tells me about what he has learnt about the various nationalities who attempt the climb and their… idiosyncracies shall we say…lol  He tells me stories.. stories of the previous climbers, of the ones who have left an impression on him, who made it, who didn’t make it, of those who didn’t seem to give the mountain enough respect, who underestimated his experience of the mountain. Dickson spoke of those who came filled with theory only to have it proven to be useless, the ones who had climbed and made it to base camp in Everest thinking they knew it all and that Killi would be a walk through a park but they didn’t make it to the summit of mount Kilimanjaro. I loved hearing those stories!  He tells me ‘we will see tomorrow at Lava Tower’. Day 3 apparently is the telling day and is normally a good indication of who will make it to the summit.

And as always, there are the porters, passing us on their way to the camp to ensure our relative comfort.

And so we get to Shira camp.  No tall trees any more , just landscape that could feature in a mission to mars movie; stark, high ridges. We find out where our tent is etc. And then we walk for another half an hour to a peak about 200ft? for further climatisation. We are accompanied by Lorien and two other porters and I learn more about them as they do about me as we walk. I love talking to the guides and porters; the people who are part of this land and culture, the ones who conduct these amazing feats of human endeavour on a regular basis.  We get to the peak and in the far distance on the left we can see another camp which Lorien tells me is part of one of the other routes to the summit. We hang out there for a bit. Again the hair draws attention and a porter wants to take a pic with me which I found a bit weird but acquiesced. Then we headed back down to camp.

Let us talk about the toilet situation as that was on my mind before I started this journey. Up in the mountain?  As you are climbing? You learn to do your first business in a bush or behind a tree.  No qualms at all.  If you are very very shy then you go deeper deeper off the trail. There seemed to be some favourite spots as the climbers  erm left their mark. It appears that breaks are usually in the same spots. The second business I waited for camp but I am assuming that was not the case for everyone so the trees and bushes along the trail probably had some additional… fertiliser shall we say.  We had a private toilet for the second business at the various camps.  LOL.  Initially I had to figure out this portable toilet.. not very successfully I might add..lol  But I do not think this private toilet was very private. It was definitely used by other campers! The reality was that it was closer to the camp tents than the main toilets.  And in the middle of the night, I do not think the other campers wanted to walk that far.  In the end I opted to going to the main public toilets. For me as weird as it sounds, I found it more hygienic. And where it was placed? EVERYONE would see you going to use the private toilet! No. I make the trek to the public ones.

So day two is over.  We have our review with Dickson.  Andrew’s oxygen levels and heart rate are tested by Dickson with a machine.  His oxygen levels are low. Dickson says rest up and we will see how it is tomorrow.  But evidently he was worried enough to find the neurologist climber the next morning to assess Andrew.  But that is for tomorrow. Tomorrow, everything changes. 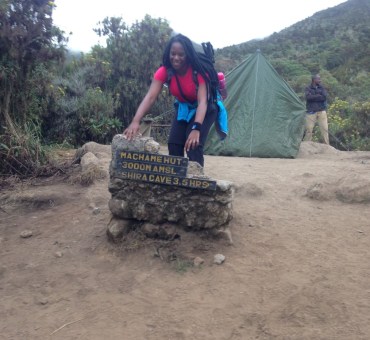 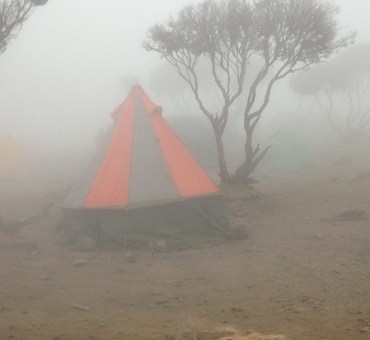