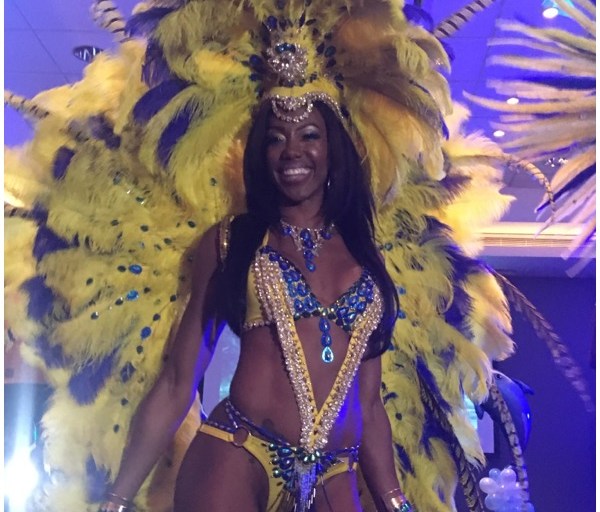 Martin Jay is a legend of the UK soca community and Funatik Mas Band is headed by no other than Mr Martin Jay (he doesn’t really like it when I call him Mr). He has been in the UK soca industry for over 20 years as a soca DJ. He has been involved in carnival in some way or another for a very long time and paved the way for others to follow and expand soca and carnivals in the UK. Quite a few people I know have called him their mentor inside and outside of the soca scene.  I knew this launch was one not to be missed.

Funatik mas band was created in 2012 following Martin Jay’s wish to develop his own vision for a carnival mas band; that of listening to the wishes of his masqueraders and providing a good, solid all round service  and costumes for the road from beginning to end.  I think in the four years, he has achieved that. Of the bands I am familiar with, the masqueraders of Funatik Mas Band are probably some of the fiercest supporters, the most loyal of Notting Hill Carnival.  I have a couple of friends who play in this band and I know they aren’t moving to another band for love or money. That says a lot.

This launch is altogether different from the previous launches I have attended so far this season.  This is a sit down dinner, comedy, carnival costume reveal and dance. Funatik Mas Band aims to give you an all round sophisticated entertainment experience. And I think this is also a reflection of this band’s members. It is more than likely you won’t see too many of them being completely crazy on the road. If I am correct, they are mostly grown folk.  They DO have fun on the road, you just won’t find them rolling on the ground or drinking to comatose state.

Mel and I enter the Holiday Inn Bloomsbury near Euston (London, England) and we are welcomed by ladies with Funatik sashes.  We meet other friends such as Nic, Barbie and Andrew. Everyone is dressed to match the occasion; dresses, suits and gorgeous high heel shoes are the order of the day. We lime for a bit, talking to various people, meeting new people, having the nice rum punch on offer, waiting to be ushered to our tables. 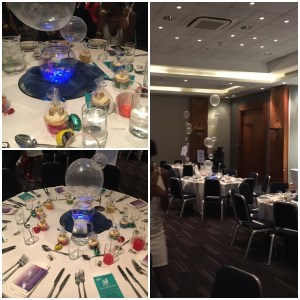 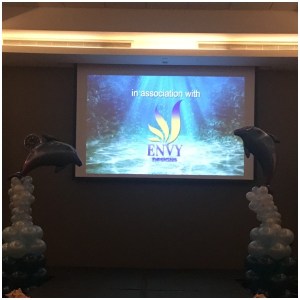 We are escorted to our tables through the doors and what beholds us is a space decorated to match the theme for this year’s carnival ‘Fantasy of the deep’.  Each table is immaculate and named after various coral reefs found in the Caribbean. There are balloons which look like bubbles and vases with stones and lights which give out a soft blue light.  The stage is decorated with dolphins and bubble balloons. The overall lighting  is a deep ocean blue. As it is Easter, each person also has a cupcake and Easter egg at their place.  Attention to detail always impresses me and the Funatik team most certainly paid attention to detail.

Supertrini with his trini twang is the overall host for the night and was the consummate host. He informed us of what to expect, guided proceedings, provided humour and played the part of charming very well. We were ushered by table to the amazing buffet.  As it so happened our table is called first which is good because there are some of us on our table with some seriously big appetites who were hungry!  The food is a lot and very good, so much so that someone on our table went for more macaroni and cheese AFTER they had their dessert! I won’t call out names. Pan is played softly in the background, playing ‘nothing is sweeter than carnival’.

Follwing dinner, comedy was provided by well known Felicity Ethnic.  She was funny and Supertrini was the focal point for most of her humor.  Can’t say that he seemed to mind too much. The business about riding like a stolen moped had me nearly choking.  Those who were there know what I mean.

Andrew Rajpaulsingh told us a bit about the upcoming Carnival Expo and the importance of securing a future for soca and carnival in the UK. Martin Jay introduces the beginning of the fashion show part of this event. Your stomach is full, you have laughed to your heart’s content, time to show the costumes. 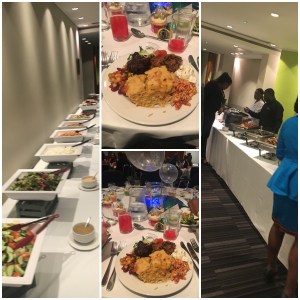 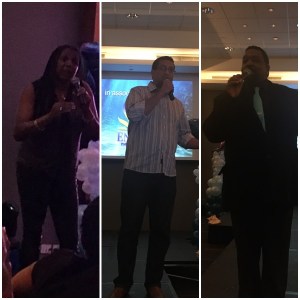 Funatik costumes were designed by the creative company called Envy Designs. There are four sections; three which are for Funatik.  The fourth, Trident Angels is more specific to Envy Designs where it appears their creative juices had a free reign. At this point, I got up from the table and went to join the many photographers at the end of the catwalk to get good pictures.  I have to say then I really appreciated the work and  respected the experience of the teams such as UK Soca Scene, Trinis in London and Raymond Lyttle.  They were able to read the models and what the structure was to be. Raymond Lyttle made us laugh as he pointed out that it was not done yet (when we thought all the costumes had been shown) as the tall models such as Andrea hadn’t modelled yet and they would have the most spectacular costumes.  He was not wrong.

The first section comprised of three costumes is a vibrant red called Sensual Secret. I felt the red and gold worked well. Prices range from £200 (male) to £280 (frontline). 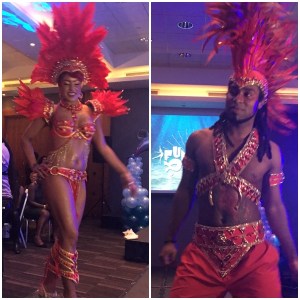 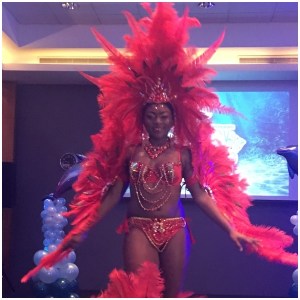 The second section entitled Garden of Love was all about the colour purple.  This section provided a bit more coverage and drama with body suits and the fabric frontline wings.  Prices range from £200 for the regular two piece to £280 (Frontline).  It was nice to see Rochelle looking fantastic and back in costume. 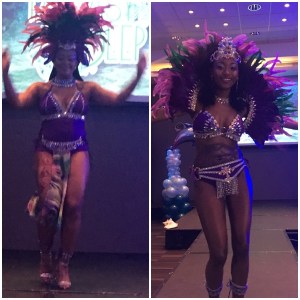 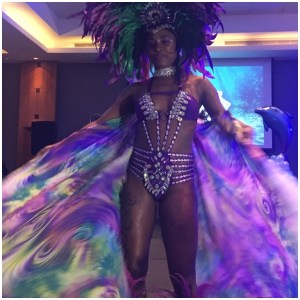 The third section themed Dangerous Beauty is made up of multicoloured feathers and fabric.  The frontline is a monokini option. Prices range from £180 (regular male) to £295 (frontline).  Sharon worked that frontline costume!! 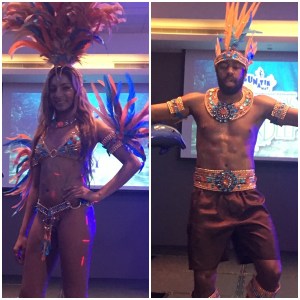 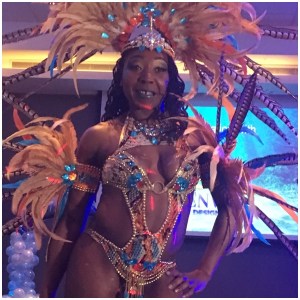 The last section was Trident Angels. This was the section for Envy Designs to demonstrate their creativity! And they did not disappoint.  Of Barbadian descent, their colour scheme of blue and yellow was a nod to the colours of the Bajan flag I imagine. There was a slight wait between the backline and the midline and frontline sections. But when well known models Andrea Cha Cha and Rianna Brown came out of the side doors, there were gasps and ooos from the crowd. It was safe to say  this level of costumes were not expected. The high leg jewelled monokinis, lovely varied headpieces, butterfly wings, angel wings in the yellow and blue combination looked amazing. These are costumes for the carnival queens and the fearless. Prices range from £200 (male backline) to £415 (Frontline Female) 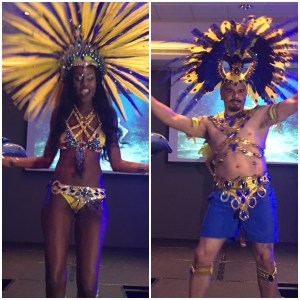 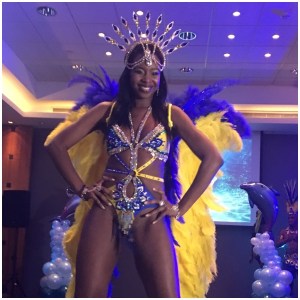 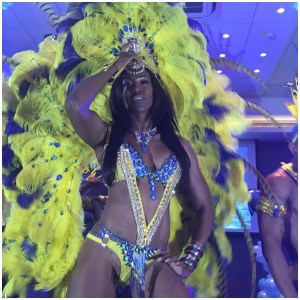 Envy designs with their range of costumes appeared to cater to all masqueraders, from those who want more coverage and are modest to the fearless carnival queens of the road.

I have always loved how Funatik Mas Band show off their costumes at their launches.  The models walk through the crowd before going onto the stage so you get a closer view of the costumes.  You are able to see how the costumes move, you can see the fabric used. The models remained in costume for quite a while so masqueraders and guests are able to get as many pictures as possible and ask the models questions. 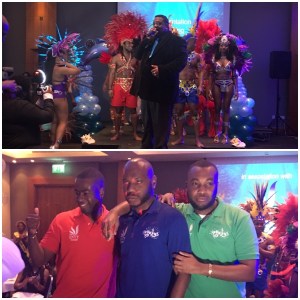 I thoroughly enjoyed attending this band launch. It was a good night out with food, entertainment and good varied costumes. As I said before, I love the attention to detail.

With Funatik Mas Band, it is all about trust.  Martin Jay and his team have gained the trust of his masqueraders. They know that Martin Jay will do EVERYTHING in his power to ensure that when you hand over your money, you will get a good service, a good costume, you will have a good time on the road. You will not have to worry about anything.  For the love of soca, for the love of carnival, a mas band full of uk soca history and experience, Funatik Mas Band is your band. 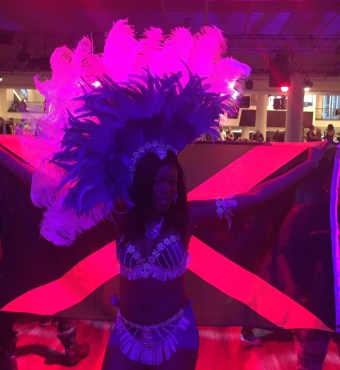 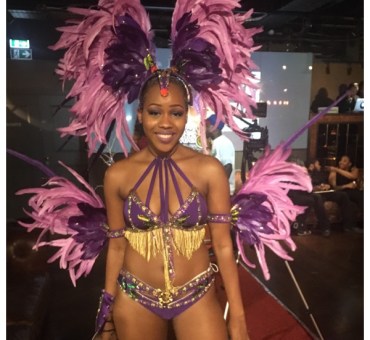