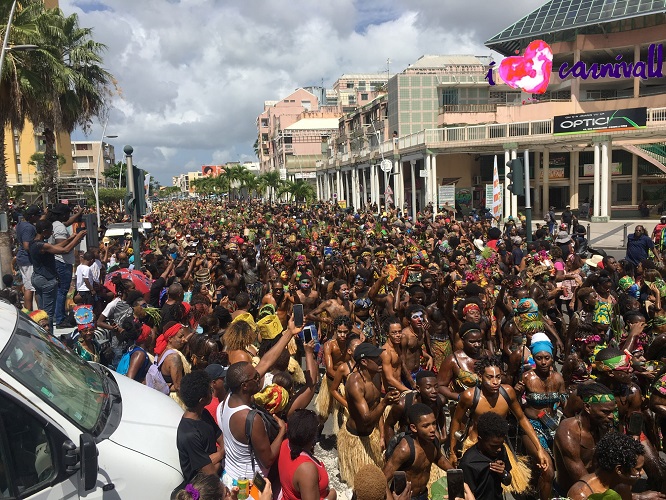 Mas Maten, the Saturday morning carnival, I was told could not be missed as it reflects Guadeloupe. And they were right.  A little bit about Guadeloupe carnival. From what I saw and from speaking to others within the carnival community, carnival in Guadeloupe is still very much grounded in culture and tradition in approach and presentation. There are three types of carnival groups based on their music; ‘Po’ bands which play music on drums covered with animal skins and other instruments, the mas groups and the percussion groups.    Almost similar to Ile Aiye in Salvador Brazil, the most popular bands such as Akyio (Group o Po) started with awareness of cultural identity through art and culture as one of their core beliefs.  Mas Maten, in Pointe A Pitre is always a depiction or a reflection of cultural, political or historical identity of Guadeloupe. The make up, costumes, products, flowers, colours,  used on their skin all have deep significance.  Although a territory of France, their cultural make up is similar to that of the other islands in the Caribbean. Include the French influence and this makes for a rich cultural heritage. 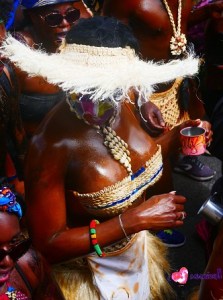 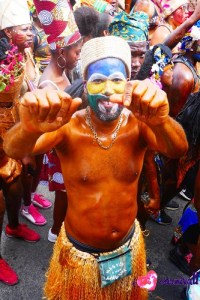 Masqueraders from many bands came together under the Group o Po Pwenlamas Le Point d’Interrogation. Mas Maten was themed this year ‘Kongo Karayib’. This year, it was thinking about the early settlers of the Caribbean; the Karibo (Karib) who migrated from South America and Kongo representing the people from Africa who were forced into slavery in the Caribbean. Masqueraders choosing Kongo covered their body with black “gwo siwo” (fat syrup) produced with sugar cane. Those who had opted for the Karib’s costume covered themselves with roucou oil. Each person paid a wrist band of 2 euros to play mas and chose which they would depict. Mas maten I have been told has become very popular with young people. 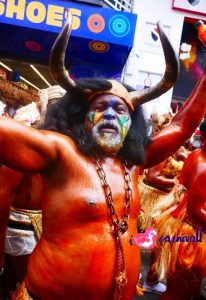 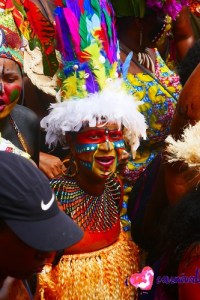 We got to Point A Pitre a bit late nut did not miss Pwenlamas. One thing I have noticed is that Guadeloupe has a lot more onlookers than some other places I have participated in carnival. People lined the streets two or three rows thick to see pwenlemas march past.

I got permission to stand on the jury stage to capture this Pwenlamas.  It was a bit of a wait as they started in a town called Les Abymes and then came to where we were in Point A Pitre and then to Le Gosier.  People were calling others along the route to ask where they were.  There were constant rumours of ‘They are nearly here’. My anticipation would build up and then would deflate when they did not.  And then they suddenly appeared, this large number of people, marching like an army to the beat of drums, singing, chanting in their costumes.  Kongo, karyib, painted faces, painted skin, beautiful patterned cloths.  Headpieces made of cloth, braches, flowers. Must have been no less than 5000 people.  It was a beautiful sight to behold.  And then they were gone! And it was suddenly quiet.

Ilovecarnivall goes to Brazil for carnival! 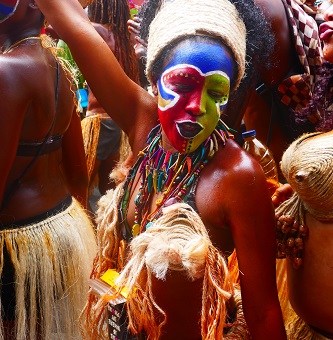 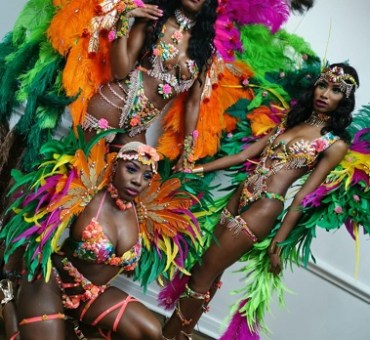