What has been your greatest achievement to date?  There have been many for me which has been good. Machel Monday was pretty big this year. That was a huge platform and it was broadcast around the world.  I was featured on BBC just last year. I have one of the biggest download podcasts in the world. My own festival Soca Brainwash sells out everywhere it goes. That’s a huge project. I have accomplished a lot in DJing. But for me to say that I have made it is me getting lazy. It will change everything people have gotten to love about Private Ryan and I will become complacent. I don’t think I’ve reached at the pinnacle of where I would like to be yet. The sky is limitless. Anything can happen in terms of what I can contribute to DJing and music.

You travel a lot.  It must be tiring and exhausting. What motivates you? The love for it, that’s one. Two, you can’t disappoint people who are literally your fans. They come out to hear and see you and so you will push yourself for people that support you. They are the same people who download your mix, will buy your ticket and will become your natural ambassadors and tell everyone about you. They might be the friend of the biggest promoter in Las Vegas who will book you on a show. And even if there is a hiccup in an event, they will support you because they know what you stand for and what you believe in. What should also keep you going and I would advise everyone is that this time will end at some point and I don’t mean death. I mean your time in the spotlight. How you use it and how you manage success is very important. I always keep that in mind. I don’t take that for granted. What are your thoughts on the growth of soca and fusion? I don’t mind it because it’s natural progression. There isn’t one genre that hasn’t had some sort of fusion. Even Afro beats. The drum patterns are similar so that’s why people compare them. But the tones they use, some of them come from EDM. And EDM has now slowed down and is borrowing from soca. Hip hop is borrowing from soca and afrobeats. So music is music. You can’t pigeon hole good music. If you can experiment and put it in a certain way then you shouldn’t fight it. But I do really believe honestly that as much as there is fusion that artists and producers should not get lost in it and lose the identity of what soca is.

What advice would you give to young aspiring DJs? Respect the craft. You need to know how to really play. So don’t ever become complacent when it comes to practice, learning new techniques of mixing, making sure that you tighten up your actual selections and sequencing of music. Know how you want to brand yourself. Know what direction you want to go. If you want to become the biggest soca DJ in the world then position yourself to become the biggest soca DJ in the world.  If you want to be the biggest hip hop DJ, same thing. You need to think what am I trying to accomplish. Because without having the mission statement, you are not going to know the direction. So you have to know what exactly you are trying to do. You need be able to network and be visible. And part of this business is that people have to like you. A promoter who likes you is more inclined to book you than if he thinks you are an A*****e. It will be ‘I don’t need you, I’m not giving you any money to play in my event’.  And it is not just the promoters. It’s about the people who just love when you are in town and they love how you play but they also like you as a person. They are more inclined to come out to support you because they want to support you. What’s next for DJ Private Ryan? What’s not? I’m going into production and looking to release something later this year. There’s production, there’s merchandising, there’s launching other party franchises apart from Soca Brainwash and Soca Starter, others I want to bring online, new territories for me to bring my own events. I’m always thinking about what is the next step. And also maintaining my abilities as a DJ. You know you have to keep practicing, you can become rusty, you’re human. There is the natural ability and there is tweaking it to become great. There are a lot of singers but there are people who become great performers and singers because they literally harness their talent. So here we have it. A DJ who is at the top of the game (he doesn’t have to say it, his success and accomplishments say it for him really), who is still always learning, researching, wanting to improve, not afraid of constructive criticism but can also identify those who are just there to ‘hate’. He is extremely knowledgeable about the DJ craft, business, the art of branding and how the personality of the DJ affects positively or negatively the success of the DJ; not just on those who hire him but on those who listen to him and will listen to him in the future. Busy as hell, but he was more happy to sit down and talk with me extensively about the ins and outs of music, business, branding and himself. That in itself says a lot. The businessman, the DJ, the event promoter, the inspiration, the brand. DJ Private Ryan. Mr Versatile indeed. 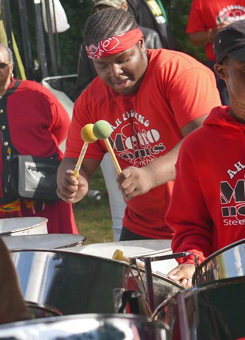 Does pan still have a place in Notting Hill Carnival?