Anyone who knows me well know that I have a serious soft spot for Grenada and Jab. My first time I went to J’ouvert in Grenada years ago, for Spicemas I was confused but hooked. I love Jab! The energy and crazy had me. No island does and holds the Jab tradition as well as Grenada.  So, when I say it is a deep honour and privilege for me to have the opportunity to interview Tallpree who for me embodies all things Jab, it is truly heartfelt.

For those who don’t know the soca artist Tallpree (name Wilt Cambridge) from Grenada sings the very distinct Grenadian soca. He has had so many hits; from his 1999 hit ‘Old Woman Alone’, to ‘The Grave, The Jail and The Hospital’, ‘Jab Jab Nation’, ‘Jab All Over’, ‘Wicked Jab’. Tallpree is Jab. He has won road march in 2000 crowned soca monarch in Grenada in 2003. He has competed in the International soca monarch in Trinidad and placed third. And I had an opportunity to have a conversation with him prior to his performance at the Grenada 43rd Independence Gala in London, England. Do you come to London frequently?  I can’t count the number of times I’ve come to London. From 1999 I’ve been visiting to England. Sometimes four times a year, sometimes once but I do. But to be here now? It’s all for a good cause.  It’s for Grenada independent celebration.  43 years!

What do you think of the fans in London?  I love it!  The atmosphere in London, the people have a different kind of love. They crave the music and entertainment so it’s a pleasure.  When we come to London we are accepted to the fullest and loudest. Words can’t express, that’s from the heart. Trust me, London? I love performing for the London people. The energy is mad.  And what I realise is whatever event you have, everybody, people from all the islands attend.  It is just mad. I really really love performing here.

What makes your sound so distinctive from everyone else?  Well I am Jab Jab to the bone you know? The inside black and all. Outside the clothing black but the inside black too. And Jab is really, there is whole meaning behind it.  That’s why people are so proud when they celebrate, when they say ‘Jab’ cause they feel it. Because it is a demonstration in a form of enjoyment. You understand? We free up, we loose up the chains. So, the chains as a mockery, the slave masters used to put on the oil, the molasses on the skin to blend in, making a mockery of the thing.  We make it double three times blacker with more oil. We just making a mockery of the whole thing basically but with a purpose but with a purpose because we are free from emancipation. That’s why Jab can’t done, that’s why it so strong.

Is that what makes Grenada spicemas distinctive? The Jab?   Very much so. The others are additives. We have the Monday night mass, the road, the soca monarch.  We have everything but Jab Jab?  People come for the J’ouvert. Our J’ouvert is most outstanding. Where do you get the most love from your fans?  I mean you can’t leave out home, because home is home. But I have to say it would be between London and Toronto. I get love everywhere I go but London have real appreciation for the music and Toronto the Jab is crazy in Toronto.  People love jab music and the way it is infectious, the beat the sound and the energy it brings.  People don’t really want to stand up when it comes on. They want to have fun and jump and wave and we have that riddim, that beat.  It’s not that groovy monarch stuff. It’s that vibes, it just wants to make you want to move.

You have been doing this for a long time. Why do you keep going?  The fans you know, the people.  Cause if people don’t appreciate it but they stand up and watch me, I’m sure by now I would be doing something else. But when you come out on a stage and see how the people love and appreciate the music, the way they have fun, you have to do better.

Thinking about your long career so far what has been your proudest moment? Hmm good questions, very good questions. Umm I can say one time performing for the Jamaican audience. Cause I started out as a dancehall artist.  And I was performing to a Jamaican audience doing dancehall and soca and the audience was just going crazy.  That means something. I had them jumping and waving about. That love was amazing. Another proud moment was me placing second in the international soca monarch.  There’s a lot.  But once I perform for my people and my people are happy. I feel good.

Would you ever do any other genre outside of jab? Outside of soca?  Yes, why not?  Because I started out with bashment. I still have it in me. But soca have taken over my soul. Are there any artists you would want to collaborate with? I’ve done collaborations with most of the soca artists from Machel Montano to Alison Hinds to Bunji and more.  But Bounty Killa has been one of my favourite artists. Big up to all the artists who have been doing their stuff and representing, the dancehall fraternity, ambassadors for dancehall and Jamaica all over the world. Big up to all the soca artists too who have set the foundation for me to able to come and say ‘Jab Jab to the world’.  I am proud to see how the music is growing. I can’t wait to see how it will be in the future.

How do you think you can push Grenadian soca forward? Well soca music on the whole has to get a facelift.  They need some to get investment.  Look at rap music from the days when rap was rap.  It was just music made for the ghetto and the streets. Investment was made into rap; videos, promotion and watch where it has reached. Soca need proper investment. When the tourists come to the Caribbean they want island music. But the music don’t reach them regularly where they live.  If they can hear our music regularly…  music is music. Soca is sweet music, happy music.

What’s the next step for you? Promotion.  I started promoting a few years ago; entertainment and promotion. I feel good about where I am now. 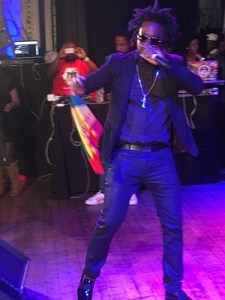 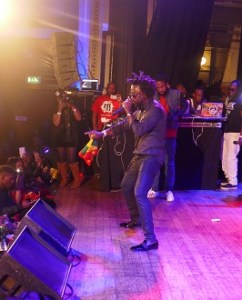 Tallpree, such a privilege. And he goes on stage later and again you realise how much he is loved by his audience. There will only ever be one King of Jab and that is Tallpree