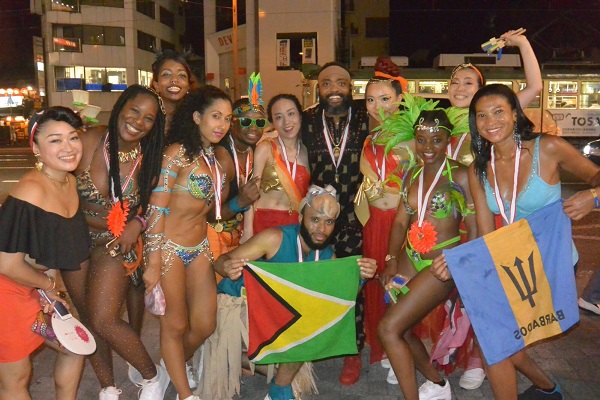 Hackney and Notting Hill carnivals happened so recently in London, UK, naturally I thought about my experiences of carnival in Japan which occurred only two weeks before that. I spoke about Day 1 of Japan Canaval.  However, I have not mentioned Day 2 did?

Japan Canaval Day Two? Was one of the most unforgettable experiences in my carnival history. Some parts were like a movie.  Totally surreal.  By this second day, all of us felt more relaxed. I am sure we did the routine more than seven times on that day. I stopped counting after a while. All I can remember is the intro starts, we bend the knee and start the routine. 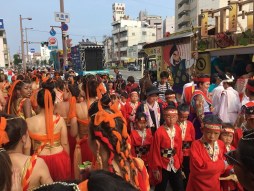 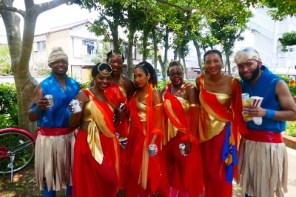 We had adjusted our costumes a bit so we were not so hot. Also we had the opportunity to wear our own costumes during the ‘freestyle’ section of the route where we could do whatever we want. We were told that Machel Montano with Che Kothari would be on the truck later on in the evening around 7pm.  But he surprised us and came on the truck at the beginning of the route and was on the truck for long periods of time!  Just seeing him there and hearing the soca music hyped us. This was what we (those of us who have been to carnivals before) were more familiar with. There was more soca played along the route the second day which was fantastic. He sang ‘Fast Wine’ and we did the routine and that gave us the extra hype we needed. 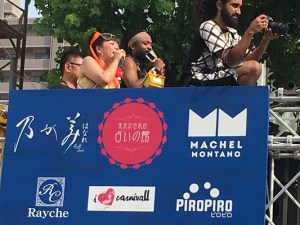 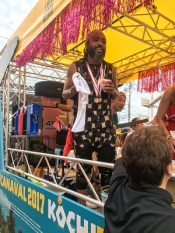 Machel seemed to be enjoying himself quite a bit. Che Kothari was busy recording our routine, the routine of some other bands and Machel’s reactions to the experience. Machel was looking intently at the various routines of the other bands when we stopped; noticing the use of the hand clackers, getting a feel for the rhythm of the traditional Japanese music and choreography.  And you could almost see the wheels in his head spinning in a Simon Cowell way thinking ‘Hmmm how I going incorporate dat into our carnival and music?’ There were times he came down from the truck and asked us internationals where we were from, how are we in Japan. We got to take pics with him and he asked to take pics with us. 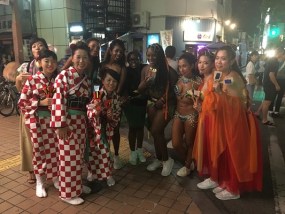 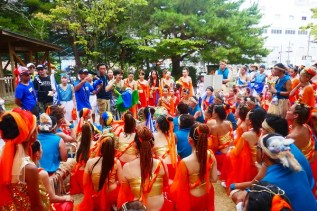 There were two highlights of Day Two for me.  The first was when we changed into our costumes and did freestyle. There were costumes from Yuma, Flora’s Mas with a Difference and others. And we could just free up and bruk out. It was night time by then. The release of doing just that?  Words can’t explain it. Kees from Kes the band once told me that for him, ‘carnival is the release’.  And right then, it was just that. It was a total release, not doing a routine, not having our hair just so, just doing whatever we wanted. Jamming behind the big truck. And we did. And loved it! It was total bruk out.  Then Ariapita turned on the hose and that just completed it. Machel signing over Iwer’s ‘Di people want water’ with the hose spray water on masqueraders and in the air at night on the road?  Game over!  I think Debbie and Bryan got life at that time! They had such big grins on their faces! Hayley, Aisha and Nicole were in the zone. Experiencing what a Caribbean carnival is like for that short time. Kegon and I were in there too but also taking time to record. Cause who on earth would ever think carnival in Japan would be like this?  It had to be captured! 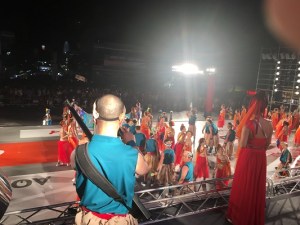 My second highlight was Machel being on the main stage with us. Now that is what you call a stage! Huge! Three levels! We were right at the top, but imagine.  We being on stage with Machel Montano in this history making moment!   Never in my wildest dreams I would have thought that was conceivable. It never even entered my mind. And oh my gosh, that was such a proud moment.  The embodiement of soca and Caribbean carnival being showcased to the land of the rising sun. That was so special. To be part of that?  Unforgettable.

And then that was it! Canaval in Japan done for us! The 10th anniversary of Selector Hemo having a band and introducing soca to the Japan. Apparently the finals is on the Saturday Day 3  but I was told this band never really makes it to the finals as it really pushes the boundaries for the Japanese.   Day Two was definitely closer to a Caribbean carnival, especially with different costumes, more soca on the road and freestyling. But I also enjoyed the choreography and the difference Japan culture presented.   The Japanese masqueraders have stamina and dedication!  It’s not just a buy your costume and rock up on the road.  They have been practicing for months for the carnaval, sacrificing time and sweat to learn the complex routine. This is compounded by the fact that the music and some of the moves of the routine was definitely not of their culture (I noticed some of the masqueraders were a bit hard in the waistline). 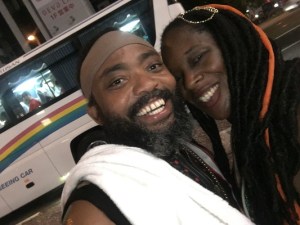 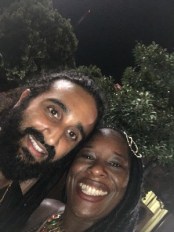 This was the first time so many internationals had played mas in Japan carnival thanks, to Kegon of Soca in Japan and Selector Hemo. Others such as Chiaiiki, Comi and Yuri were fantastic. For the first time, it wasn’t bad at all.   Some things were lost in translation and communication. I would have also liked a couple for days after the carnival I think to rest, have a beach lime and check out Okinawa.  But I guess these and other things can be thought about for the following years.  I am definitely heading back to Japan. 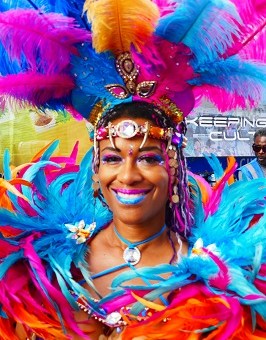 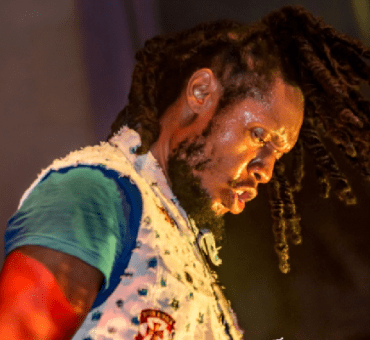