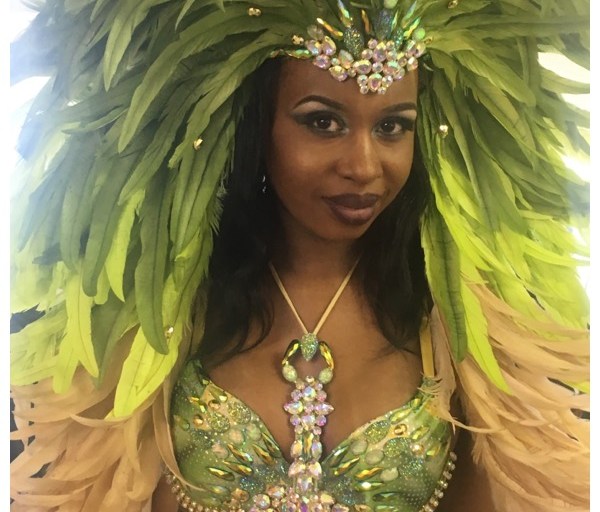 I receive an email inviting me to a private viewing of Lagniappe’s Notting Hill’s Carnival Costume Presentation entitled ‘Legends’. I am very curious. I thought ‘Hmm that’s different’. I hadn’t heard anything about a launch for Lagniappe and I wondered whether in fact they would be launching this year.  There was one particular Lagniappe costume last year which I liked, hence my wanting to see the costumes for this year. This is all hush hush and the mystery of it all intrigues me further.

I really did not know much about Lagniappe.  But speaking to Roddy Maharaj from the band, I find that I do in fact know about this band, or their influence at least.  Lagniappe Mas has had an influential role in the development of most of the modern day bands in some shape or form. Lagniappe started about 25 years ago as a sound system (Lagniappe Sound System) and first produced music for Dragons Mas Band, then played for South Connections.  Whilst doing so Lagniappe also played at Luton, Reading, High Wycombe, Brighton carnivals as well as in Europe playing with Masqueraders 2000. Lagniappe Mas was the first band to bring body paint to Notting Hill Carnival in the year 2000. This was called ‘Enter the Dragon’ with the band 3 Canal playing on the road with them.  This was done for 6 years before Poison UK Mas band was formed with the team of Lagniappe holding a share in the band.  The brand named Lagniappe was temporary shelved. Triniposse Mas Band, Tears,  and the Busspepper team (which later created Euphoria Mas Band) were all hosted under Poison  (of which Lagniappe was part of) before becoming independent bands.

The brand Lagniappe was resurrected seven years ago and was thought of as the phoenix rising from the ashes. In that time, Lagniappe Mas band has been collaborating with Pure Lime and Chocolate mas bands.  Costumes were then introduced into the band. This year, Lagniappe will be completely independent.  They will be on the road on the Sunday with the idea of ‘Splash’ and costumes for the Monday. In full costume, there are at least 200 masqueraders with Lagniappe. There is a fun mass option and a small group called Soca Evolution who will be producing some t-shirts for the road. Masqueraders originate from all islands and music will be a bit of everything. 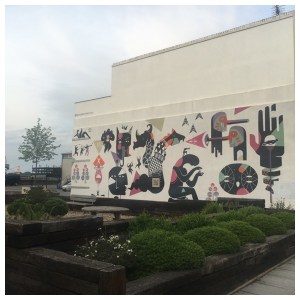 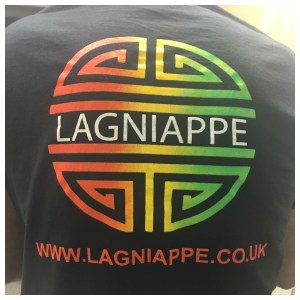 Lagniappe’s showing of costumes to an exclusive audience is held at a studio in Woolwich. I walk in and see some familiar faces; Rae who does make-up and producer of bespoke cups and glasses for the carnival road and Tia of the Carnival Goddess Experience.  Some of the models are showing off costumes to the audience up close and personal, coming right to individuals. There is no stretching over heads to see the costumes or wondering what the costumes look like up close.   This is a very different experience.  One one hand, as it is in a studio, you feel as if you are part of an organic interactive process with all the paraphernalia of photography around you suggesting that work is continuing.  However, on the other hand you feel like one of the very privileged few, similar to being invited to one of the boutiques on Bond Street and having it closed so you can have a private viewing of items. But then there is soca playing, food and drink reminding us that well, this is still carnival related, our culture and there was a liming feel.  Whilst viewing the costumes, I get to  catch up with Rae, Tia and Janet from Trinis in London about Berlin carnival, costumes and hair styles. 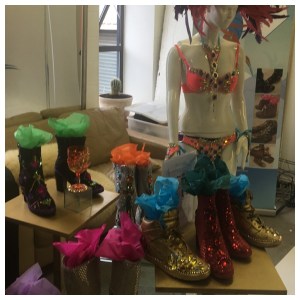 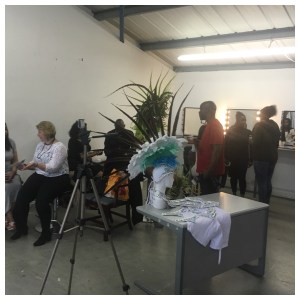 The theme for the costume is called Legends chosen by the designer Paul O’ Donoghue of UCOM Mas Band. Paul is one of the designers whose signature style of costumes I can pin point anywhere now; well produced, very pretty with large headpieces, lots of feathers and lots of bling! There are four sections.  The first section in pink and blue is called Amphitrite. This has frontline and backline costumes. 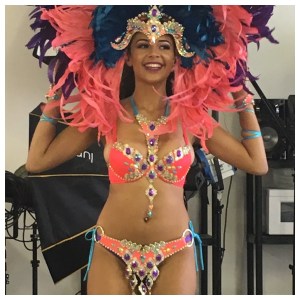 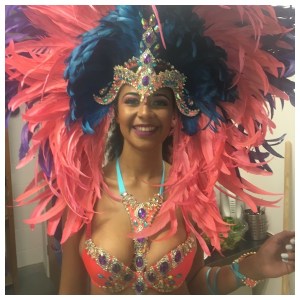 The premium frontline second section in green is called Amazon. 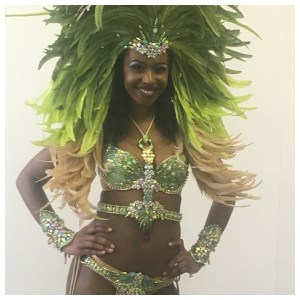 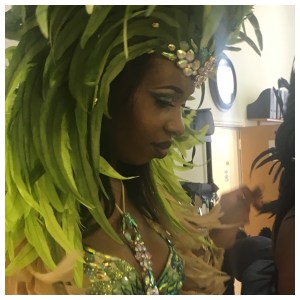 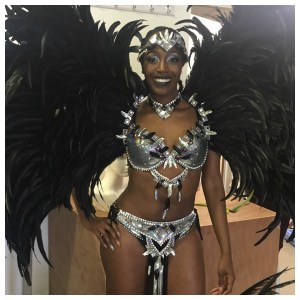 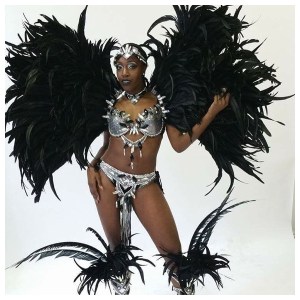 And last the Premium VIP section is called Aphrodite. This is the only monokini but is the stand out piece in white with turquoise gems and feathers and a large headpiece. 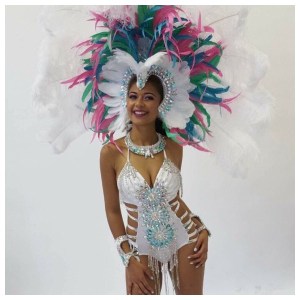 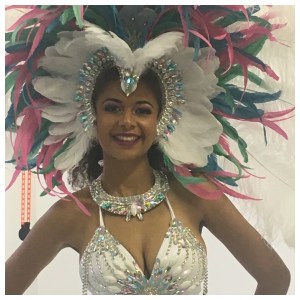 Aphrodite and Amazon sections have male costume counterparts. The costumes are lovely and the models especially Rianna seemed comfortable and to be enjoying herself.  My favourite is  the pink and blue Amphitrite. Prices of costumes range between £200- 420.00 and this is an all inclusive band.  Immediately at the viewing, I see some masqueraders making deposits for their favourite costumes. 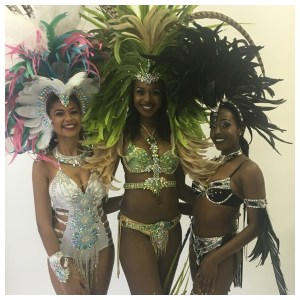 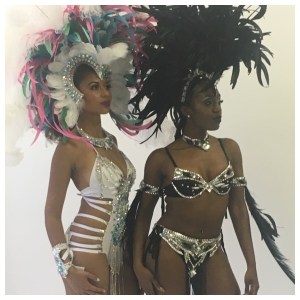 I enjoyed this exclusive viewing.  There was a sense of a depth of experience with reference to carnival, quality over quantity and treating every masquerader as a VIP. Roddy and Shermain were very attentive. It was a nice relaxed but special viewing, not fussy. I found myself liking the team and their ethos.

For more information on Lagniappe Mas band, please visit www.lagniappe.co.uk. or the facebook page Lagniappe Mas. For more images, please see Trinis in London, Brian Quaver or Ilovecarnivall on Facebook. Lagniappe costumes will be showcased at other events to be announced.

London School of Samba: Bateria and the dance! 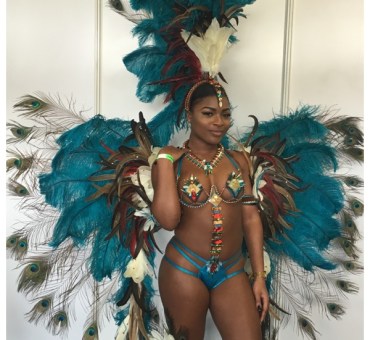 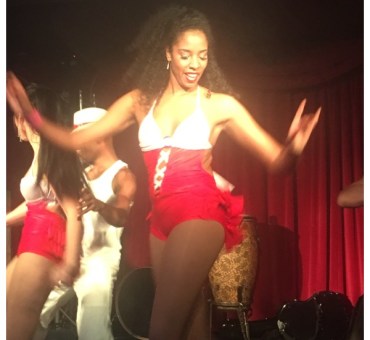