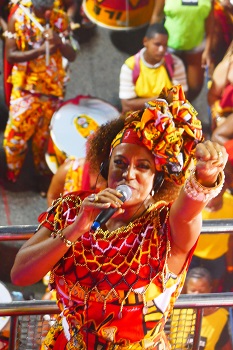 Why do you love carnival? For some of us, it is the chance to wear a beautiful fierce costume and tek a wine on the road. It is the end product of a year’s hard work. It’s maybe a time of release, to express our culture, our sexuality.  It’s fun and full of vibes. And all of that is fantastic. What draws each of us to carnival is unique and personal.  For others though, in other places in this world, carnival is all of the above but more.  It’s powerful.  I’m talking about Wakanda powerful. Are you ready? It’s about to get deep. 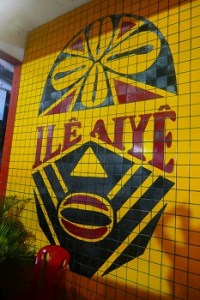 There are some carnival bands on this planet that transcend their geographical locality in their influence, power, focus and unequivocal beliefs. The mighty Ile Ayie of Salvador Brazil is one of them. This  carnival band performed at the pre-celebrations at the World Cup in Salvador in 2014. It has drawn celebrities like Naomi Campbell to join their ranks in the past. I knew about this band. But there’s knowing and then there is experiencing and feeling. You can research, write and watch videos all you want. It will not even come close to experiencing. This was the impact of seeing Ile Aiye for me.

Ile Ayie carnival band is the resistance against obscurity and history of oppression for the Afro Brazilians. It is raising the consciousness of the Afro Brazilians celebrating unapologetically the beauty of black people and culture.  It is making visible the people who were excluded in the past from certain social areas in Salvador, yes even excluded from Carnival.  To explain further, let’s talk a bit about Salvador as a city.

Brazil has the highest percentage of people of African descent in the world (75%). And Salvador is the oldest city who had the largest percentage of African slaves passing through this city during the slavery era.  It still has the largest population of African descendant. On the surface, there is now racial harmony and everything is just Disney. Come out of your tourist shell, talk to a couple of people and look for yourself just a little deeper and you will notice that this is not the case. Economically, Afro Brazilians are the poorest. They remain marginalised. Afro Brazilians were not allowed in some carnival blocos (bands) in the past. And the carnival bloco/band/group Ile Aiye grew out of this as a response to the political and racial disparities and discrimination. Aiye continues through its social work continues its attempts to improve the social standing of Afro Brazilians. 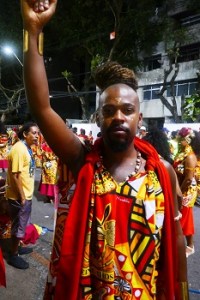 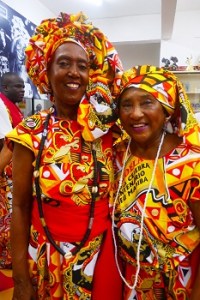 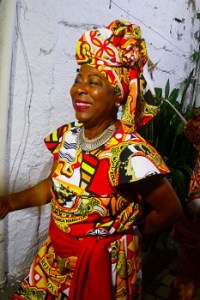 The name Ile Aiye stems from the Yoruba language translated means ‘The Home of Life’.  The Yoruba culture and beliefs are strong within the black population of Brazil. It was started by Antonio Carlos ‘Vovo’ and Apolonio de Jesus in the 1974 in Liberdade which has the largest black population in Salvador.  From the presence and efforts of Ile Aiye, other Afro blocos/bands emerged such as Olodum and Male Debale. The influences of Ile Aiye?  Afro culture, Afro religion, Afro dress, the Afro Brazilian experience eveerrrryyyy thang Afro. And there is the controversial mandate of this band that no one can join this band that is not of African descent.  Some might call it discrimination and racism. Ile Aiye and others see it as keeping and claiming a space for themselves in a celebration and cultural event where they were denied having a voice and presence for a very long time. They were not allowed on the road during the day.  The informal response from Ile Aiye? ‘Let them have the day, we have the night’ 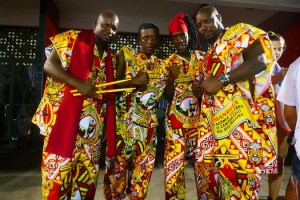 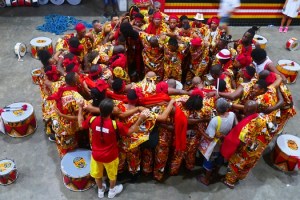 Ile Ayie has an opening ceremony in Liberdade in the evening before the band (afro bloco) goes on the route.  It was around 9sih?  As much as everyone stressed you have to see Ile Ayie on the road, they also stressed you have to go to the opening ceremony. I had the opportunity to hear and see the drummers practicing before the ceremony started and see them coming together in prayer. (Include the drummers practicing).

There was a serious crowd of all ethnic backgrounds for the opening ceremony. I was perched on a wall as no way I wanted to miss this.

It starts with the drums.   You hear the drums coming up this steep hill.  At first, you don’t see them. You hear them. Like a heartbeat. Da da dum. Da da dum. It brings to mind historic war drums indicating the beginning of a battle. It is powerful.  The drummers stop at the Dos Santos Family home  where for many years Mãe Hilda de Jitolu, the mother of co-founder Vovô presided as spiritual mother to the group and formal leader of the condomble (Religion based on African beliefs). The elder women of the band came out and throw popcorn and hominy into the crowd. They go far out into the crowd. Then doves are released. Ile Aiye is then ready to start the 12 mile march into the centre of town. They set off.

I was pleased to have a brief conversation with the President of Honor Silvio Humberto who is also one of the founders of the Steve Biko Cultural Institute at the balcony of the Dos Santos home before they headed off.

Salvador is like a social apartheid here. When you see it outside the carnival, there is the tourist part, but you couldn’t even stay in the hotel. You probably would not be able to stay in a hotel here.  If you walk here, if you don’t open your mouth, people will say you are Afro Bahia.  You didn’t see your parents here? [laughter]  But if you open your mouth, they will know you are not Afro Bahia.

It was so powerful hearing the drums coming up the hill. You may not be able understand the music but it will touch heart. After that touch your mind.  It is the power of the music, the power of the ancestors.   When the group was organised in the 70s, it was the opportunity to fight against the inequalities, the harsh inequalities. Salvador has the power.

Is it getting better? Is it getting worse? If you look in the past, you can see we are improving .But we have a long way.  But we have an expression here ‘There are seasons, you don’t have vacation’. When you spend time to fight, you have the power. You have the energy.  We need more. I’d like to fight in other cities but what can I do? I have to fight here. 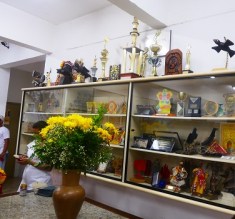 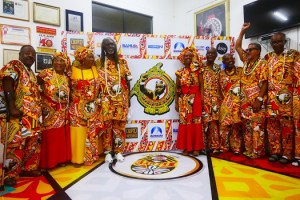 Visiting the VIP area of the Ile Ayie headquarters was interesting. Gone are the days this band were persecuted and blacklisted by the police and media in its early years. Whilst at the house of the Dos Santos Family, I see all manner of important looking officials there, wanting to be seen at the Ile Aiye opening ceremony. I look around to take in the history at the Ile Ayei base. Their trophies and awards and accolades are formidable. They are now recognised, respected and a force to be reckoned with. 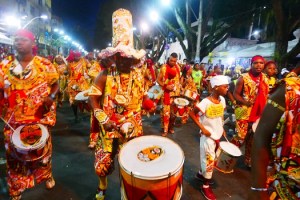 We left Liberdade and headed to town to get to see them. It was a long wait. They didn’t get to Campo Grande until the early hours of the morning. Must have 3:30, 4 am.  But people didn’t mind. The crowds were there, waiting. I went to the starting point to get some pictures of the drummers and the costume. The theme of this year is Mandela and the face of Mandela is clearly visible on their costumes.  There is no bling or feathers here.  This goes back to the traditional black culture costumes; fully clothed, head wraps. Masqueraders (it almost feels disrespectful to call them that) will put up the power fist when posing for pics. The age range is serious.

Then I rushed further up Campo Grande to the media point to get a better ariel view.  This had to be captured. Even as I write this now, weeks after, I’m still emotional. My heart is beating hard.  I can still see very clearly in my mind and watching my footage, it brings it all back; the power of this one lone dancer on the big truck, spinning, dancing almost seeming to draw power from the music, the people below her and perhaps her ancestors. 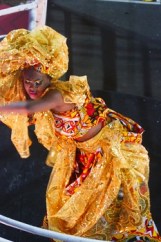 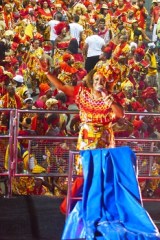 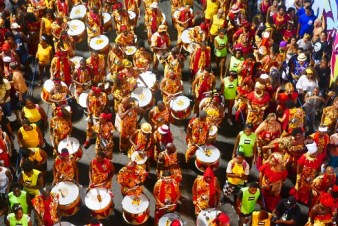 With the theme of Mandela this year? Incorporating the message of Mandela in song, on their costumes and their posture?  Connecting the experiences of those in South Africa  to that of Afro Brazilians in Salvador? It was so damn powerful.  Sometimes I found myself catching my breath, forgetting to breathe. This is a very different side to carnival. This is carnival activism and artivism at its finest. It is genius. Ile Aiye is a carnival band with a purpose. And like I said, you just have to experience it.

All images and video footage was taken by Ilovecarnivall at Liberdade and Campo Grande in Salvador, Brazil.  Many thanks to the band of Ile Ayie and Claudio. 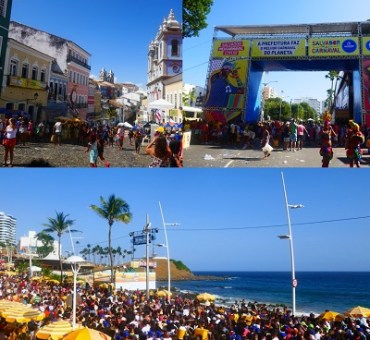 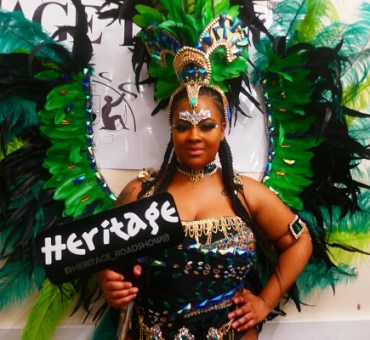