TriniPosseUK Mas Band I have heard of.  However, I can’t say I am very familiar with them.  There are three things I have assumed about this band.  One, that they are heavily influenced by the Trinidad culture as the name of the band implies. Two, that they are very organised as I have received emails about the launch of this band. Three, that they are quite popular and some big names of the London Soca Community are attached to them.  Here is what I found out about them from the team.

The TriniPosse team is a 10 year old all inclusive sponsored band. The founder Atash Rafeeq, through his experiences and friends from HARTS Mas Band in Trinidad and Tobago created TriniPosse UK. Atesh wanted to spread the carnival spirit  outside of the West Indian culture.  Consequently, TriniPosse masqueraders are very diverse ethnically.  It is reported that masqueraders will fly in from Australia, Canada and the Bahamas, just to play mas with TriniPosse at Notting Hill Carnival.  Then they return home.  The masqueraders are mainly young professionals between the ages 26-38. However, masqueraders have been known to come with their children and provisions are made for this. This band’s ethos is ‘Bringing People Together’.  It is their wish to bring people together from all around the world, giving those who have never participated in any carnival the opportunity to join carnival seeing how it is done from a Trinidadian perspective.

Music on the road for TriniPosse Uk will be entirely soca  with some speciality cross over mixes of soca and main stream music. This will be played by some pretty well known international DJs such as DJ Private Ryan, Shot Master J, Back to Basics and Barrie Hype. Time to see if my assumptions are correct.

From the first exhausting day of Carnival Expo, I head to the band launch of TriniPosse UK.  Shy will be meeting me there. I also bump into Emma at this launch as well. The band launch is held at a bar called Slug and Lettuce near the area of St. Paul’s Cathedral.  I have been there many times before as I remember Buspepper used to have their fetes in that venue.  It is a nice space.  The red carpet has been set out and the DJs are playing music. I imagine that the models will be coming down the stairs so Shy and I position ourselves there despite it being so close to the big speaker. After we get some roti from the Ashton and friends team.  The roti was good and Shy and I wolfed that down in record time!

The crowd for this launch is diverse ethnically.  I see some people who used to play with Poison Mas Band back in the day.  But I must say, this is one of the few bands whose masqueraders are the least familiar to me. This is a well turned out crowd.  The ladies and guys are pretty well dressed. The usual suspects are here media wise.  By now I feel like the shadow of Janet and Joseph of Trinis in London. They are the media team I have seen most consistently at the band launches I have attended. The DJ line up for the launch is quite impressive!  We have DJ Markee (got so much respect for this guy), DJ Shep Beats, DJ Raskal and Konata. The music was good!  I thought Trini soca would be on heavy and continuous rotation but a lot of the soca from the other islands was played as well so you didn’t hear one song about three times for the night! Konata had all kinds of energy!  He was like a ball of amazing crazy getting the crowd ready for the presentation of costumes. He was in the crowd jumping, dancing, giving the mic to the people to sing lyrics to the songs.  He was upstairs, downstairs, at the DJ booth. Energiser bunny had nothing on this dude! And it worked!  By the time the metal poles and red ribbons came out demarcating the boundaries of red carpet, the crowd was ready to see the costumes. The media is angling for spots to get good pictures.  Everything is ready.

TriniPosse will be celebrating 10 years of participating at Notting Hill Carnival this year and their theme for their costumes is ‘Unity: Bringing Nations together’.   There is a fun mas section, one costume section and an ultra VIP costume. 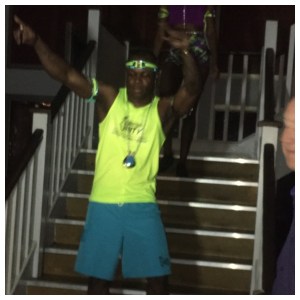 The fun section is called Harmony.  It was said you can enjoy the mas in this carefree breezy costume and enjoy an explosion of colour. This fun section was filled with bright colours of yellow purple and tourqoise. I especially liked the female shorts.

The costume section had four options. The first was called ‘Prowess’. This was stated to be the opposite of ‘harmony’ and allows you to strut your stuff on the streets of Notting Hill.The second option is called ‘Truce’. It was stated this costume is not only for the comfortable but for the bold and the brave. The third option entitled ‘Open Waters’ was stated to depict the openess we share and exemplifies enjoying carnival as one. The male option ‘Solidarity’ is said to allow the male to accompany the females in a primarily female band. The last costume was a surprise costume.This is part of the Ultra VVIP ultimate premium service where the masquerader will have a private  butler. I liked the pink  and blue combo and the large headpiece. And suddenly, that was it! Costumes done! That went by pretty quickly!  I liked the colour combinations and the headpieces were pretty big.  The party got started.  This crowd is not shy in no shape or form.  Before the poles were even removed, the center of the dance was already filling up. People were ready to have a good time.

So were my assumptions correct?  Well this band IS influenced by Trinidad carnival. And they were very organised.  There were no hiccups what so ever that I saw.  They were a tight team. All team members knew what they were doing, they did it and there was good communication. And some well known people such as Konata are attached to this band.

For a band very welcoming of everyone and especially those new to the Caribbean carnival culture, for a band with great service and masqueraders who like to party and are not shy of having fun, for a good line up of DJs and a band that indeed brings nations together at Notting Hill Carnival,  TriniPosse UK is your band. 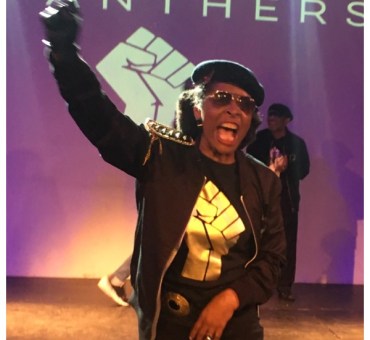 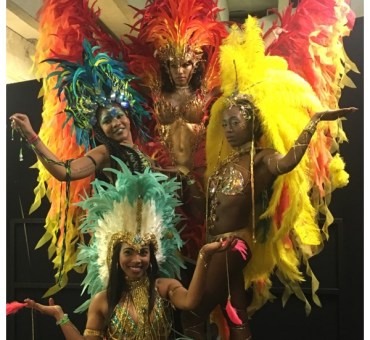